June was nesting season for spotted turtles as well as other turtle species on Nantucket. Numerous reports of nesting turtles and turtles on the move towards nesting sites were pouring in throughout the month! While we were not able to document the exact locations of any nests at Medouie Creek, our turtles made some short term, but long distance movements that we attribute to females searching for prime nesting areas. 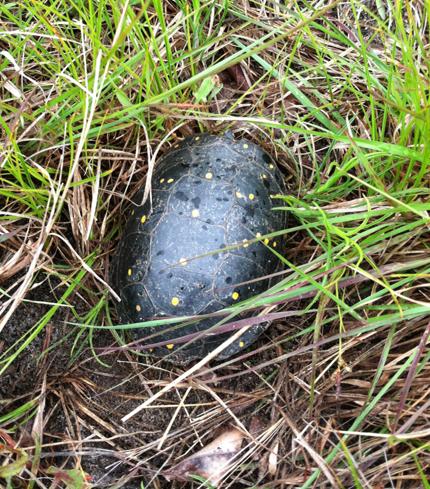 Turtle 232, aka “Barnacle”, named by Robin and Aiden O’Dell, might look more like the tortoise but acted more like a hare and won the prize for the longest distance moved over the shortest time period! Over 3 days, she left her usual location in the northwest corner of the marsh and moved across a grassland, through a yard, past a house and in to the northeastern corner of the Medouie marsh. We found her nestled in a dense hummock of moist sphagnum moss where we presume she nested. A day or two later, she turned around and went right back where she came from! As the crow flies, she moved nearly 3/4 of a mile round trip in less than 7 days! While our female turtles have been busy in June, our sole male turtle, #159 aka Waldo, hasn’t moved a muscle. He has been sitting in the same pool of water underneath a large red maple for the last several weeks.

Males do the majority of their moving in the early spring. They move frequently from pool to pool in order to increase mating opportunities. After that, it’s not unusual for males to wait out the heat of the summer in one cool and wet location.  We won’t likely see them move much again until the fall when they start making their way back to their winter hibernacula. 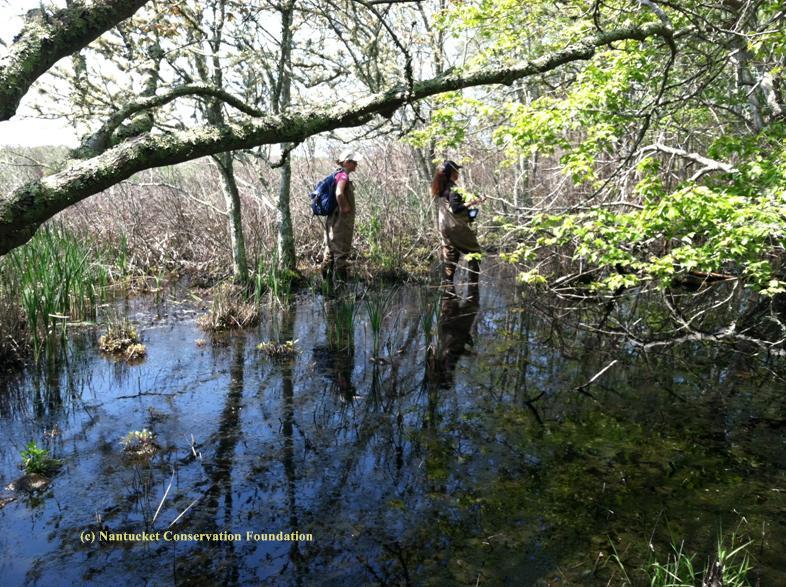 Cyndi Park and Iris Clearwater, NCF’s seasonal field assistants, work to relocate “Waldo” in his red maple pool on the edge of the Medouie Creek marsh.

Now that most females have laid their eggs, we expect for them also to slow down and enter estivation (a period of dormancy) during  the hottest and driest parts of the summer. At Medouie, we see them estivating in deep, muddy-bottomed pools, under cool, moist sphagnum moss and even in dry, woody or grassy uplands. By our next report, all the turtles should have picked their spots for the remainder of July and August! Stayed tuned!