The photos and videos on social media October 30th, 2017 were dramatic. Ocean waves in Madaket washing over the dune separating Hither Creek from the Atlantic Ocean, swirling under and around the stilt house and pushing sand into the southern end of Hither Creek. For a while during this story, it looked like Hither Creek would open to the Atlantic Ocean and the water rushing in threatened Millie’s Bridge, sending Nantucket DPW workers out to shore up the bridge. When the storm cleared, luckily the bridge was stable, the stilt house was still standing and the Atlantic Ocean was back on the other side of dune, now much shorter than before. But there were still dramatic changes to the landscape. All that rushing ocean water had significantly eroded the sand dune separating the ocean and Hither Creek and that sand had been push into Hither Creek, filling in most of the small circular salt pond closest to the silt house and blanketing the surround salt marsh with a thick layer of sand.

After the storm: sand covering shrubs and salt marsh and filling most of Millie’s Pond

Once the storm subsided, waves have occasionally washed over from the Atlantic Ocean only during extreme high tide/wave events, but under normal conditions, the southern end of Hither Creek is reconnected to tidal flow from Madaket Harbor. Significant sand remained deposited on top of the salt marsh and within the salt pond.

NCF’s Research Program Director, Jen Karberg became very interested in what that thick layer of sand would do to the salt marsh underneath it. Salt marshes typically respond well to sand additions of an inch or two, small scale wash over events are vital for building up marsh elevation, encouraging growth of marshes grasses and helping salt marshes respond to climate change. Very little research has documented the response of salt marshes to this much sand deposition. Events like this are likely going to increase and salt marshes play a vital role in stabilizing our eroding shorelines and buffering our uplands from intense storm events. Understanding how large sand washover events can impact salt marshes will help NCF and other island organizations prioritize management and protection on Nantucket. 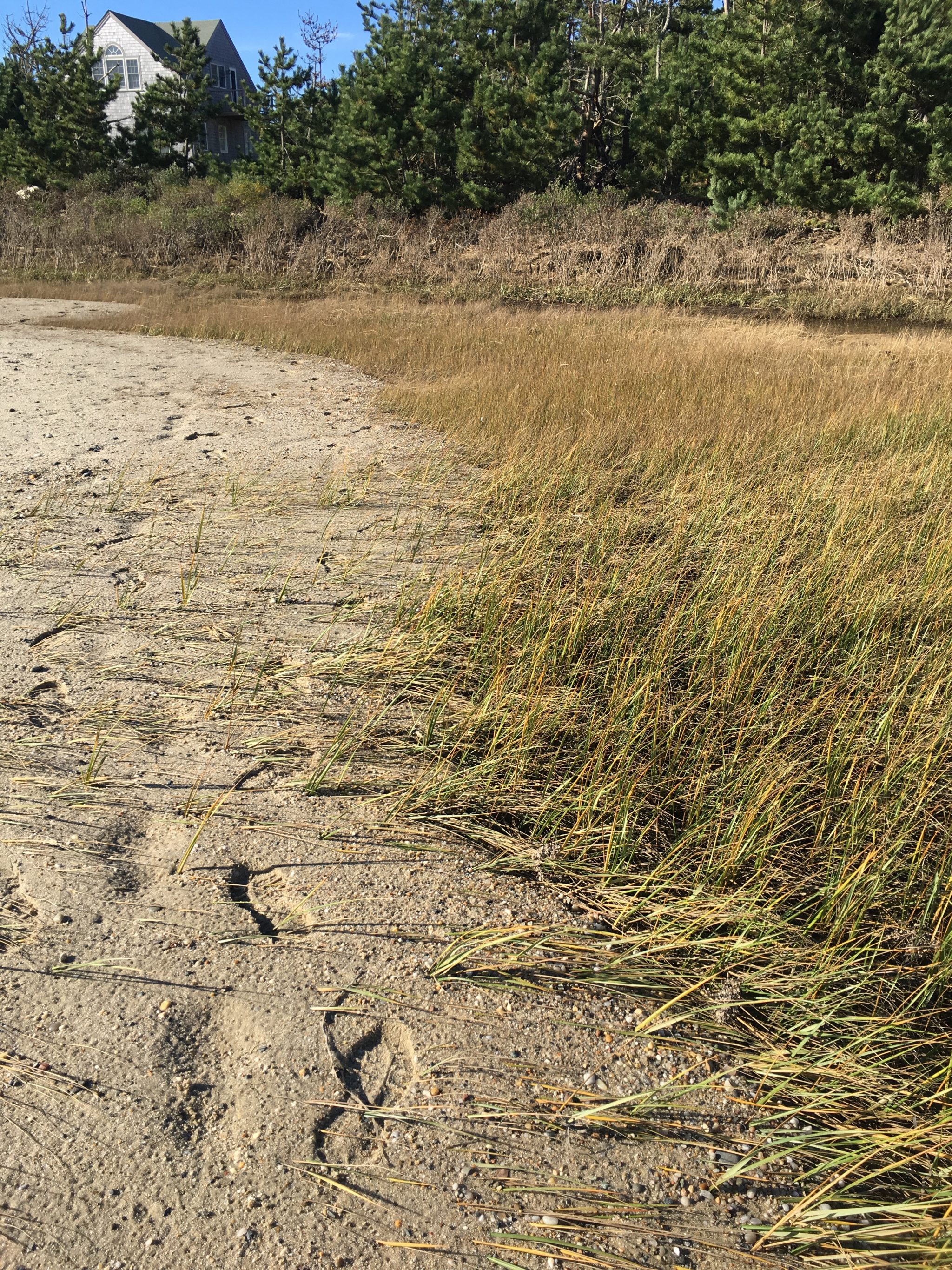 So, with permission of the Massachusetts Audubon and the Town of Nantucket (owners of the majority of the salt marsh at the southern end of Hither Creek), NCF set out to study how the salt marsh would respond to these deep sand deposits as well as how long those sand deposits stay in place. Over the next year, NCF staff will be documenting sand extent and depth over the salt marshes, tracking the movement/retention of sand and examining salt marsh vegetation growth in response to the sand deposits.

In November, Jen established randomly located plots at the site, measured sand depth over the marsh and documented any vegetation that was still present. The response of salt marsh vegetation will depend on how much sand remains in place come spring when the plants start growing again. This is just the beginning of this monitoring work, which we will continue for at least a year but a few observations can already be made. In November, sand depth over the salt marsh ranged from 1/3 of a meter to up to 2 meters in some places. Interestingly, the sand deposit within the creek rises so much higher than the remaining salt marsh that incoming tides preferentially cover the remaining salt marsh which has already lead to the death of much of the grasses in some places. This also means the tide is flowing right around the base of Millie’s Bridge so the concrete blocks put in place to protect the bridge will likely remain for a while!

Observing the area at low tide, significant amounts of sand appear to be washing off of the big sand deposit and out into Hither Creek. Where these new deposits of sand fall out in the creek may end up may changing the navigational bottom of the creek. Between November and January, the sand deposits have been advancing over the salt marsh and closer to the bridge with each major storm and the loss of salt marsh is already being felt. Salt marshes both buffer large water flows and can hold on to water, keeping it from flooding uplands during large storm events. A neighbor on the pond had their basement flood with water during the most recent winter storm. This had never happened before to them before, with the only difference being that the salt marsh in front of their house was swamped with sand. These are just some small changes already being seen as a result of this major landscape change. Continued monitoring over the next year will help us understand how this area is changing and how future storm changes will impact Nantucket.

Dr. Jen Karberg, wetland and plant ecologist and the Research Program Supervisor in the Science and Stewardship Department for the Nantucket Conservation Foundation.

*Please note, this blog post was originally published in The Inquirer and Mirror  in February 2018 in the article series called Island Ecology. The Foundation’s Science staff regularly contribute to our local newspaper and reprint the articles here soon after.

The Nantucket Conservation Foundation is a private, non-profit land trust that depends contributions from our members to support our science projects, conservation property acquisitions and land management efforts. If you are not already a member, please join us!  www.nantucketconservation.org