The Foundation owns and operates the two remaining commercial cranberry bogs on the island.  Over 230 acres are currently being cultivated and harvested at both the Milestone Bog and Windswept Bog.  In addition to continuing the tradition and history of 200 years of cranberry framing on Nantucket, the Foundation is also committed to preserving the fragile wetlands, hardwood forests and open spaces surrounding the bogs as part of its overall mission of protecting the island’s fragile and unique ecosystems. 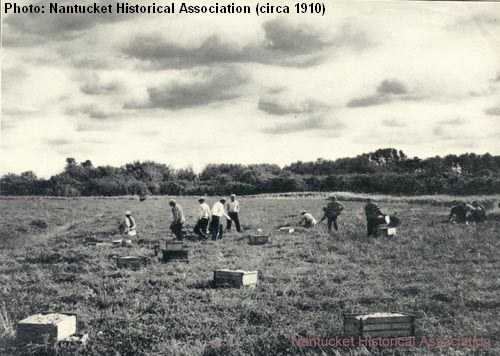 The cranberry, along with the blueberry and Concord grape, is one of North America’s three native fruits that are commercially grown. Cranberries were first used by Native Americans, who discovered the wild berry’s versatility as fabric dye and healing agent and food. By mixing mashed cranberries with deer meat, they made a survival food called pemmican, or pemican. They also believed in the medicinal value of the cranberry, using the berry in poultices to draw poison from arrow wounds.  Native Americans also taught early settlers, including the Pilgrims, about the properties and benefits of this unique fruit.  According to folklore, cranberries were given to the Pilgrims to be served at the first thanksgiving meal in 1620.

Cultivation of the cranberry began around 1816, shortly after Captain Henry Hall, of Dennis, Massachusetts, noticed that the wild cranberries in his bogs grew better when sand blew over them. Hall began transplanting his cranberry vines, fencing them in, and spreading sand on them himself. When others heard of Hall’s technique, it was quickly copied and commercial cranberry farming in the US was born. Legend has it that Captain Hall also discovered the “bouncing’ method of sorting good berries from bad when he reportedly noticed that good berries bounced when dropped down a flight of stairs and good berries did not.  The discovery that cranberries has a small pocket of air inside of them also helped in revolutionizing the “wet” process of harvesting that relies on the berries to float to the surface of a flooded bog (see our section on harvesting).

Cranberries have been grown on Nantucket since 1857 and were an important part of the Island’s economy until just prior to World War II. The Nantucket Conservation Foundation’s stewardship of the Island’s two remaining commercial cranberry bogs began in 1968, when Roy Larsen, Walter Beinecke, Jr., and Arthur Dean joined forces to purchase the assets of what was then known as Nantucket Cranberries and incorporated the Milestone Road Cranberry Bog’s total of nearly 1,000 acres into the holdings of the Foundation. In 1980 the Foundation decided to retain ownership of the land but lease the cranberry operations out to Northland Cranberries. The bogs were ably tended by Northland but the economics of renting the land, growing the fruit and shipping off-island proved to be too much for the Wisconsin based company and in 1992 the Foundation went back to running the cranberry farming. Today, the Nantucket Conservation Foundation enlists the services of over a dozen fulltime, and, at harvest ten part-time, employees to manage the vast and complex operations of the cranberry bogs.

The name “cranberry” derives from the Pilgrim name for the fruit, “craneberry”, so called because the small, pink blossoms that appear in the spring resemble the head and bill of a Sandhill crane. In addition to Massachusetts, the major growing areas for cranberries are New Jersey, Oregon, Washington, Wisconsin, and in the Canadian provinces of British Columbia and Quebec.

Cranberries are a unique fruit. They can only grow and survive under a very special combination of factors: they require an acid peat soil, an adequate fresh water supply, sand and a growing season that stretches from April to November. Contrary to popular belief, cranberries do not grow in water. Instead, they grow on vines in impermeable beds layered with sand, peat, gravel and clay. These beds, commonly known as “bogs,” were originally made by glacial deposits. 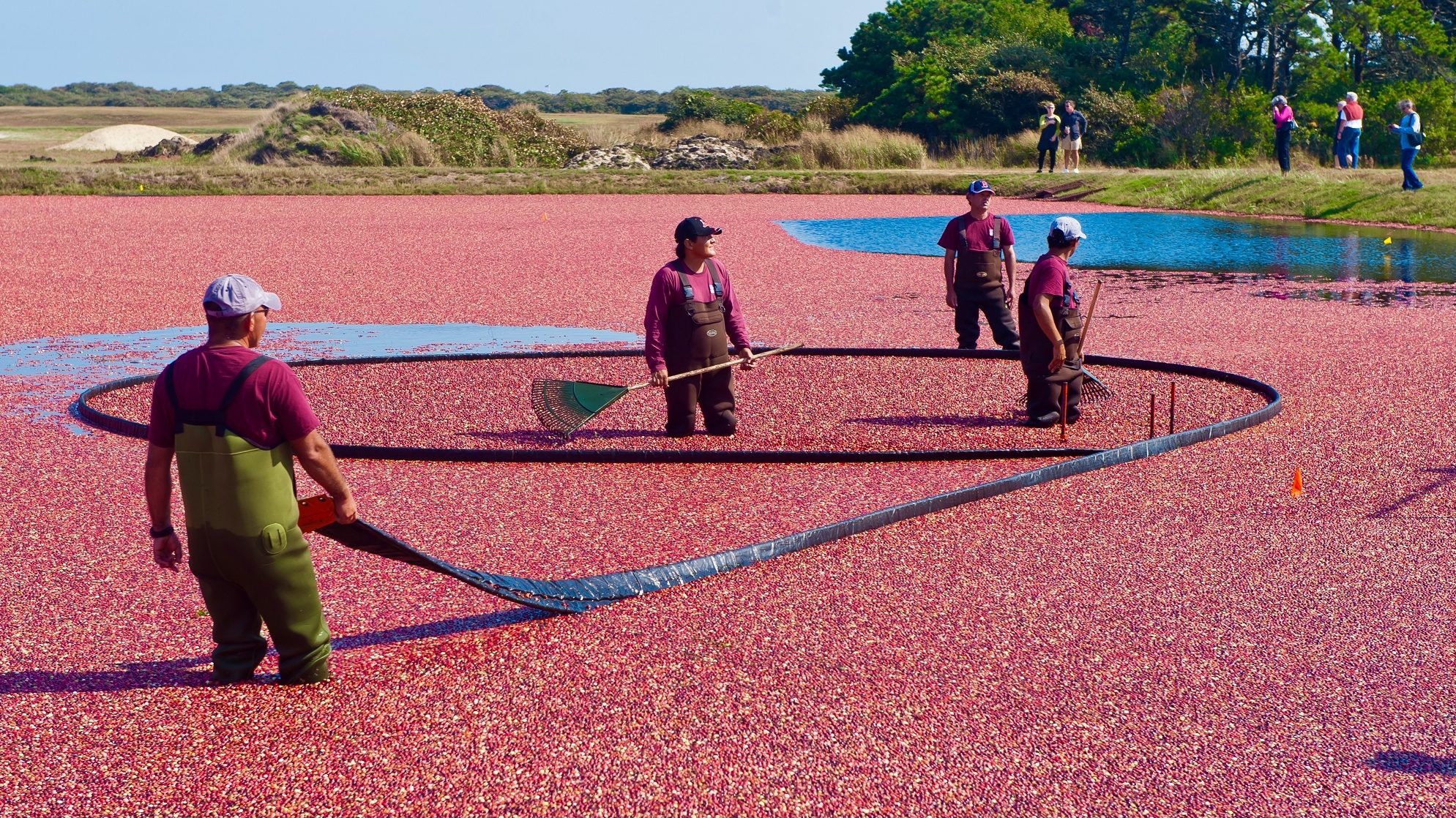 Cranberry vines are planted by gently pushing vine trimmings into a prepared bog that has been leveled and covered with a layer of sand. New plantings must grow for about three years before they will bear harvestable fruit. If properly cared for, the 6-8 inch tall plant will produce berries indefinitely. Modern management practices include weeding in the spring, fertilizing in the summer, pruning in the fall to keep the vines at their optimum length, and periodic re-sanding in the winter.

A complex water distribution system must irrigate the bogs in dry weather. This same system is also used to protect flower buds and the ripe berries from spring and fall frosts. Also, flooding is required during the fall harvest and throughout the winter months to minimize the effects of cold and wind damage.

On Nantucket, the Early Black variety of cranberries (small and black-red when ripe) are harvested during late September; the Howes variety (larger, oblong and medium-red when ripe) is picked from early October into November. Cranberries were individually handpicked until the early 1900’s, when the wooden cranberry scoop was developed. The cranberry scoop method of harvesting was faster, but it left a great number of berries on the vine and was very labor intensive. Since World War II, growers have used an assortment of mechanical pickers, including the Western picker and the Darlington picker. Tines (metal fingers) on these machines scoop underneath the berries and hold them, while the forward motion of the picker plucks them from the vine. The machines damage the vines less than the use of the scoop, but as much as twenty percent of the fruit can be bruised using this method. 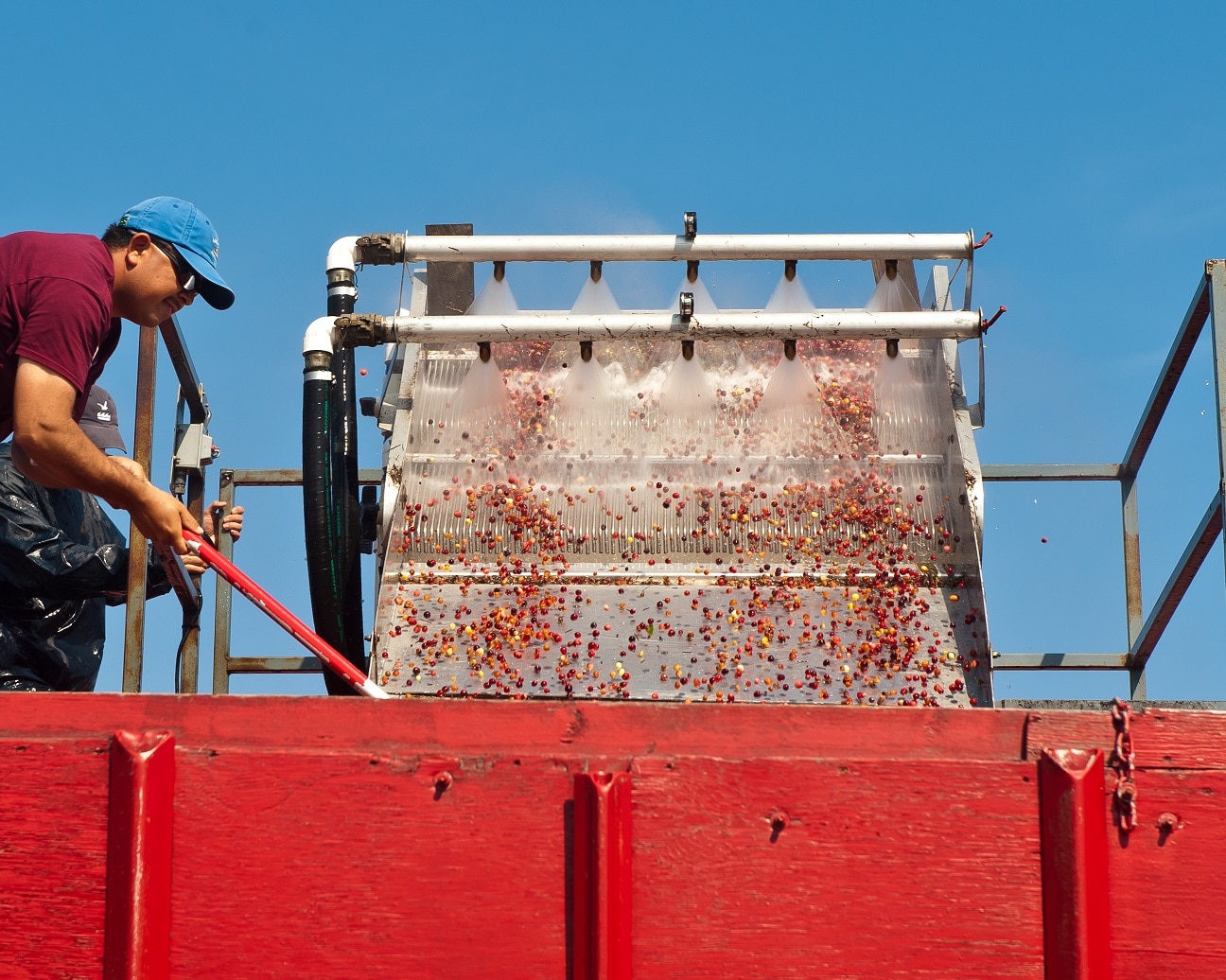 Today, more efficient and less damaging mechanical techniques are used. During wet harvesting, a section of bog is flooded with a foot or so of water. A machine called a water reel beats the submerged vines with a series of horizontal paddles. This causes the naturally-buoyant cranberries to detach from the vines and float to the surface of the water. They are then corralled and pulled to the edge of the bog with floating wooden booms. The fruit is loaded into large dump trucks by a conveyor. Following washing and screening, the berries are shipped by tractor trailer to the mainland to be processed by fruit handlers.

Nantucket’s cranberries are processed in three steps. First, they are washed and blasted with a strong current of air to eliminate leaves, twigs, and other debris. Second, they are sorted using a Bailey Separator, where the berries drop vertically through a series of seven compartments. At each level they may either bounce over a four-inch high board into the “good berry” side of the machine or drop down to the next lower level. Firm (good) berries bounce; soft berries are overripe and will not. Those berries that are overripe will continue to drop until they reach the bottom of the sorter and are eventually discarded. The good berries are bagged and sent to freezer storage for future processing into juices, sauces, or relish. 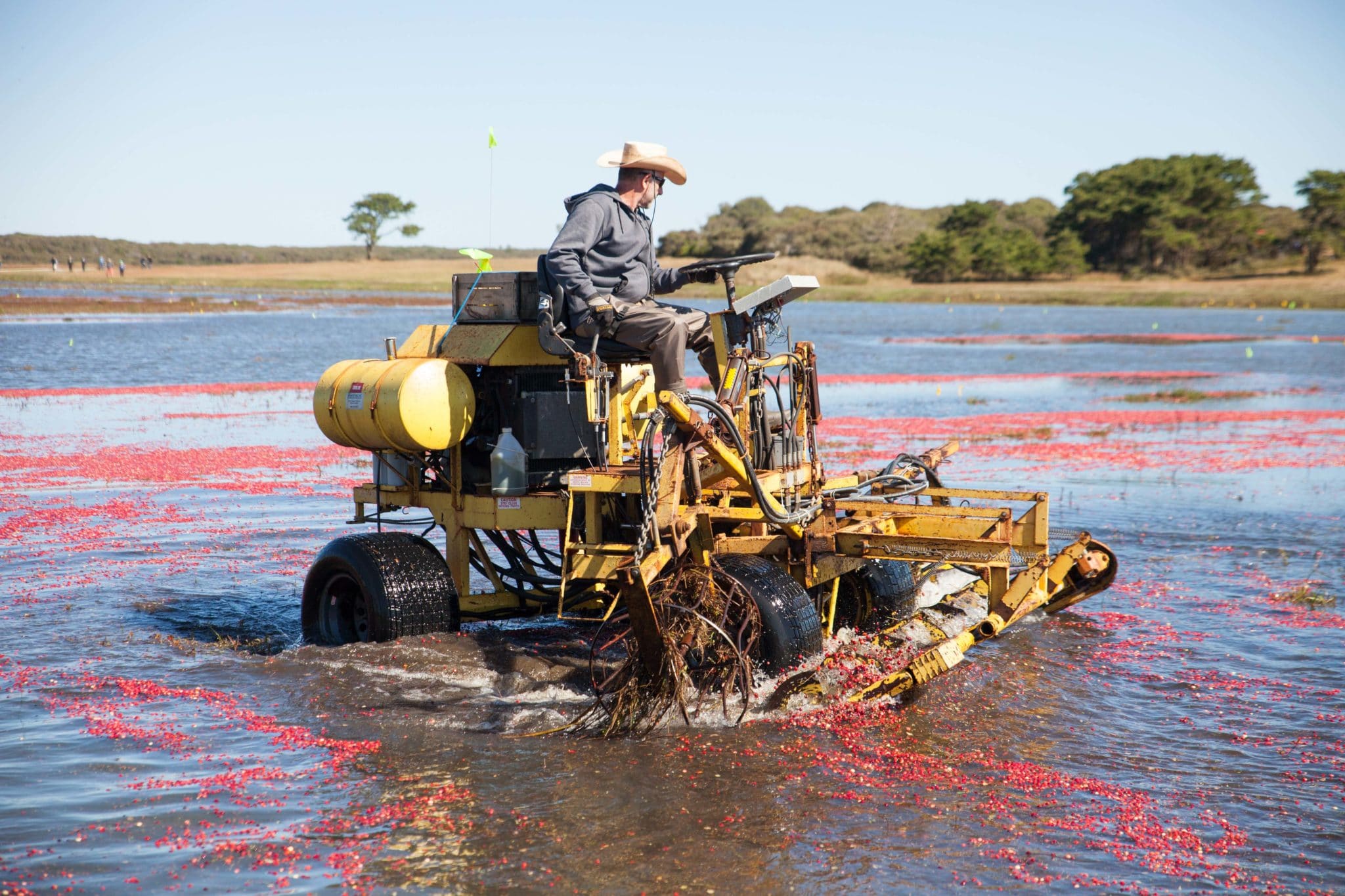 Because wet harvesting causes the fruit’s protective wax coating to break down, only dry-picked cranberries are sold as fresh fruit. After they have gone through the same sorting routine as outlined for wet-harvested berries, dry-harvested berries are visually inspected for color and appearance and polished by soft brushes. They are then bagged and immediately sent to market.

The Foundation once was a member-grower of the Ocean Spray Cooperative.  It now sells its berries to Decas Cranberry. Decas supplies many food supply companies and is the second largest cranberry company in the world. It produces concentrate, sweetened dried berries, cranberry extract powders and oils, and markets fresh whole and sweetened dried cranberries.

It is possible for visitors to come and watch the harvesting of the Foundations cranberries at the Milestone Bog during the Cranberry Festival which is held on the Saturday of Columbus Day weekend in October. 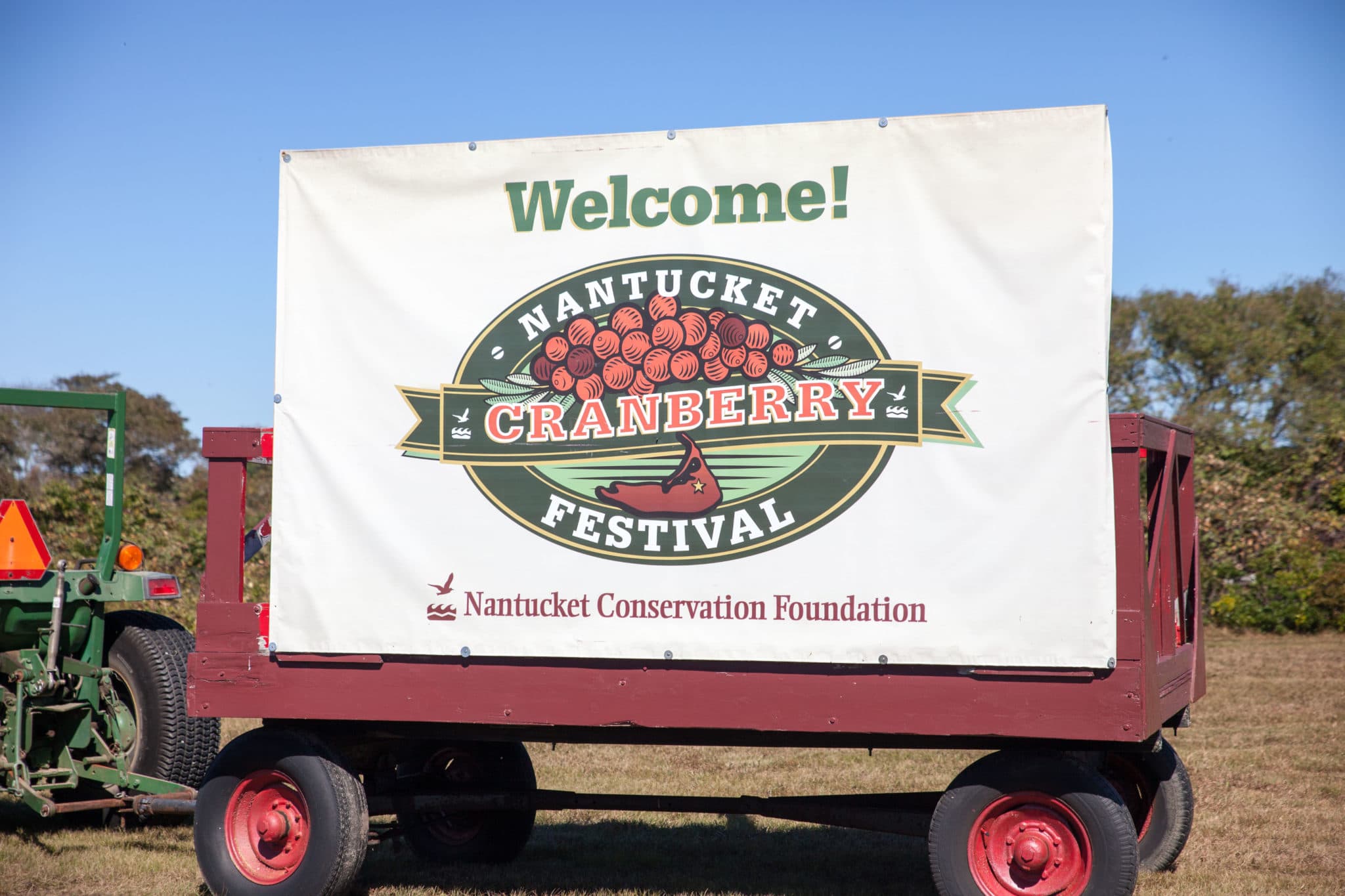