Today was an exciting day for us here at the Nantucket Conservation Foundation! We were reunited with an old friend.

In the summer of 2009, we received two separate reports of Eastern box turtles (Terrapene carolina) – a male found in Surfside, and a female found at the Head of the Plains. At the time, these were unusual sightings as Edith Andrews recalled that box turtles had not been seen regularly on Nantucket since the 1960’s. Box turtles have turned up in archaeological digs on Island and are known from the fossil record, but it was believed their populations had been extirpated from the island. We were unsure if perhaps these two turtles were pets that had been set free, and had coincidentally turned up at the same time? Or were they last hold outs of this species on Nantucket? Both appeared healthy so we decided not to keep them in captivity, but instead we placed radio transmitters on them and followed their fate for a year.

Thankfully, both hibernated through the winter and emerged in the spring healthy. They wandered the Head of the Plains and Ram Pasture area, feeding throughout the summer. Satisfied that these two knew just what turtles should do, we removed their transmitters, filed a tiny notch in to their shell so we would always have a way to recognize them, wished them well and set them free. Every summer we are on the look out for these turtles and always wonder about them – but never see them.

Today, we received a call at the NCF office from a woman and her young son reporting that they had found a box turtle at a home along Hummock Pond Road. A quick google search brought them to our turtle blog where they learned what species they had found and that we wanted people to report turtle sightings! Low and behold, they’d found our long lost male box turtle 9 years later. 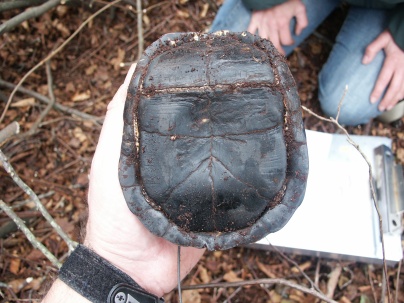 We were so happy to know that this turtle is still alive and seems very healthy. As the crow flies, he’s about 2.5 miles from where he was last seen which includes a few major road crossings. We hope that we’ll see him again in the future and are always optimistic that we’ll find the female again too someday! As always, we encourage everyone to call us with sightings of these rare and beautiful creatures. If you see them as you wander our properties, we would love to know! Please take pics, collect a GPS point and call us at (508) 228-2884!

The Nantucket Conservation Foundation is a private, non-profit land trust that depends on contributions from our members to support our science projects, conservation property acquisitions and land management efforts. If you are not already a member, please join us!  www.nantucketconservation.org