At this point in the year, we are all hungry for signs of spring. As Danielle wrote in a recent NCF Science and Stewardship blog post, peepers are singing spring songs in the marshes and ponds, and spotted turtles and snakes are emerging to bask in the sun. Otherwise, the landscape remains mainly a study in grays and browns, with occasional patches of green mosses and lichens. It will be a while before everything is lush and green, unless the weather warms for a week or so. But there are already a few things in bloom on Nantucket—and not just the daffodils and other spring bulbs planted in gardens. Passing by one of the large street elms, you may have noticed their shaggy reddish-brown flowers filling the canopy. Or you may have already seen the willow breaking from the fuzzy “pussy willow” stage into green and yellow flowers loaded with pollen. Walking along trails at Squam Farm or Squam Swamp, there are many hazelnut bushes decorated with the dangling caterpillar-like male catkins; take a closer look, and you’ll see the delicate star-shaped red female flowers scattered here and there along the twigs, too.

And there is another scarlet-and-gold show just arriving in town; for the next few weeks,  the flowers of red maple will emerge around the island and the gray branches will be decked with color. This tree is well named: the flowers are red, the maple keys (helicopter-shaped winged seeds) are red, the leaves are red when they first unfurl, before greening up over the summer…and finally the leaves turn crimson again in the fall. 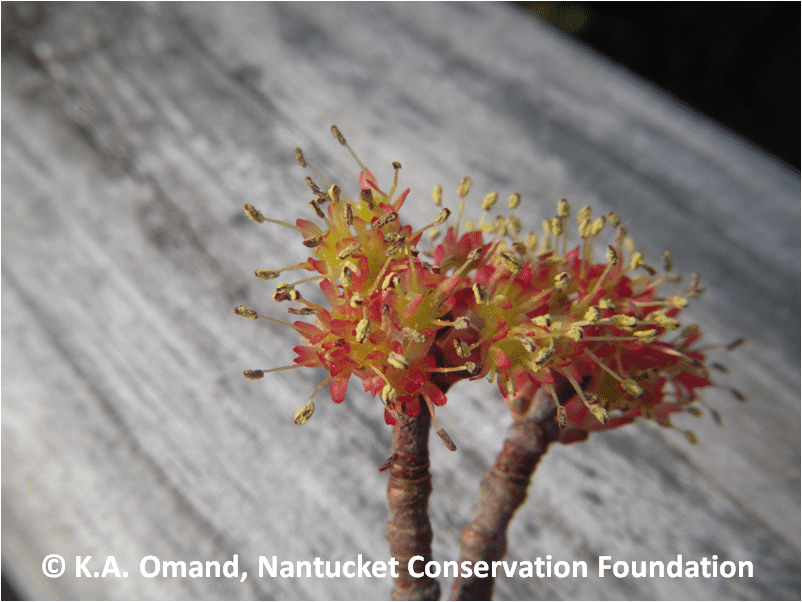 What’s the benefit to blooming so early—weeks before the first leaves unfurl? Leafless canopies allow the best dispersal of pollen—that yellowish dust that leads to plenty of sneezing during spring allergy season. And how does all that pollen get delivered to other flowers so that fertilization can occur and seeds can form? Wind carries the pollen long distances to the waiting flowers. Take the hazelnut catkins, for instance. They have evolved not to attract insects, but to dangle freely in the breeze, shedding pollen every time they shimmy in the wind. Interestingly, the red maple also produces nectar in its flowers. One of the most adaptable trees around, this species can live in swamps or in upland forests, and it even tolerates our wind and salt spray fairly well. So, it’s  a “Jack-of-all-trades” kind of tree. One of the red maple’s skills is “hedging its bets”, for seed production; it blooms early to capitalize on the open canopy for wind dispersal, but it also produces bright red flowers with nectar and pollen, which attract birds and insects, that in turn aid in pollination. An individual tree may have only male flowers, only female flowers, or some of both! It’s a very flexible species. You can read more about the sex life of red maples in this article: Arnoldia Article About Red Maple. The nectar and pollen of red maple provide an early feast for foraging honey bees early in the spring. If you search for “red maple + honeybee” online you will find many photos of honeybees visiting these vivid flowers. But red maple blossoms also sustain an unknown number of native insects. All of these visitors in turn provide a flush of insect protein for the newly arrived migratory birds. It’s all in the timing.

Trees, shrubs, insects and birds have all evolved over thousands of years in any given spot. Cues such as temperature and day length trigger the trees to start flowering or leaf-out, and the insects and birds and other organisms need to be in synch in order for everybody to get a chance at a good meal or a mate. The study of this timing of natural events is called phenology. Unfortunately, some organisms are less able to adapt to rapid changes than others, so sometimes these inter-dependencies are thrown off. It may not matter much if there are shifts back and forth from year to year—with some years being “bad” or “good” for different species. But a strong trend in one direction, or extreme variability, can really upset the apple cart. Consider last April’s weather compared to what we are experiencing this year—and consider the long term trends. Researchers around the world are becoming more and more interested in studying how plants and wildlife respond to changes in climate, and whether the responses of interdependent species are out of synch (termed “phenological mismatch”). In order to measure the changes, scientists record the time of many different events, from the blooming or “bud break” of trees to the return of migrating shorebirds or songbirds. “Bud break” is the time when the scales on a leaf or flower bud split apart, but just before the leaves or blossoms begin to unfurl. Considering that it’s almost time for many birds to lay eggs, the profuse early flowering of wildflowers and trees had better happen soon. Other insect eaters such as snakes, bats and amphibians are also eagerly awaiting the feast as they emerge from dormancy.

Fortunately, some flowers are just beginning to pop into bloom along the forest floor, such as windflowers (Anemone quinquefolia), with nodding five-petalled flowers (typically white, but often tinged with pink). Like the maples, these tiny wildflowers will take advantage of the leafless early spring canopy, which lets more light fall upon the forest floor and allows the plants to photosynthesize freely. You can see how the timing of all of these events can be so important for the spring food chain. If flowering too soon or too late, somebody may go hungry, or unpollinated.

Walking along the trails you may spot more wildflowers, like the bright yellow cinquefoil (Potentilla canadensis) above, which resembles wild strawberry, but has leaves bearing five leaflets rather than three, and yellow flowers rather than white.

There will also be masses of tiny blue-tinged white flowers, called bluets or Quaker Ladies (Houstonia caerulea). These wildflowers grow along trail edges and in fields, and like the windflowers, they are taking advantage of blooming and photosynthesizing before the canopy trees have leafed out, and before most of the grasses have grown tall. They also grow close to the ground, where the wind speed is lower and the ground absorbs heat to create a pleasant micro-climate for small flying insects. Be sure to check out these tiny wildflowers and look for their insect pollinators while you are on your next walk.